From Edward P McGinty in FL:

The agents from Homeland Security visited me today. The Villages Trump Supporters want me silenced. The called the Federal Government on me. I will not be silenced. All they have accomplished is to further anger me. This week CNN is coming to interview me.

Here’s my email complaint to both Homeland Security and The Villages: 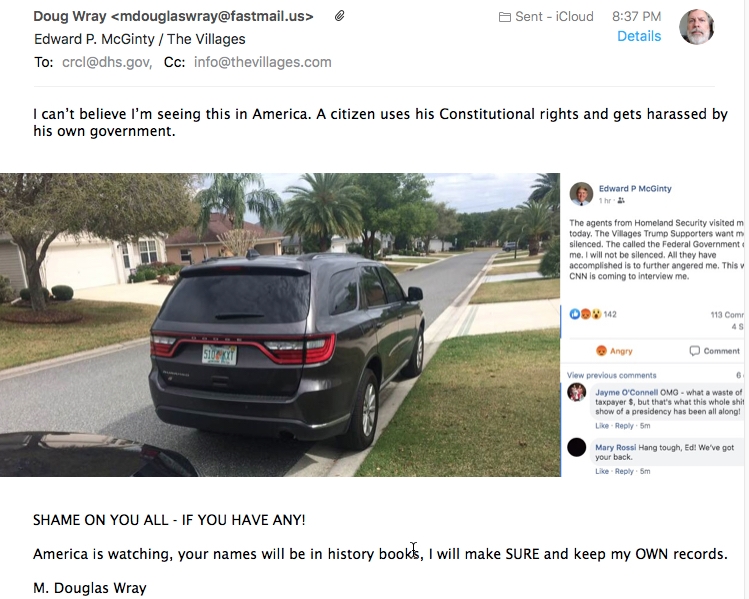 This shameful bullshit needs to be called out LOUDLY and REPEATEDLY.

Trying to intimidate citizens is wrong, but most especially when it comes from the head of the GOVERNMENT.

THIS IS NOT WINNING.

“Just about perhaps, 2 months ago a Trump woman posted a video. In that video I said to her something like “ go ahead and tell Trump about me. Tell him to come down here to The Villages, I would like to punch him in the nose. Actually those were the words that my favorite president Harry Truman said to a reporter at the Washington Post.”

Everyone feeling outraged about this heavy-handed Trumpian bullshit needs to write to crcl@dhs.gov – complaints at DHS and info@thevillages.com to tell them what excrement they are.

PS – HomSec, since I’m sure you’re reading this, I’d like to offer my personal challenge to MR Trump to meet me in an arena of his choosing for a bare-knuckles, no-holds-barred fight to the death or be forever branded a COWARD. His choice of weapons. Completely serious too. The man has openly threatened to ‘beat the hell out of’ his critics, I thought I’d return the favor, politely of course.

One thought on “Homeland Insecurity”