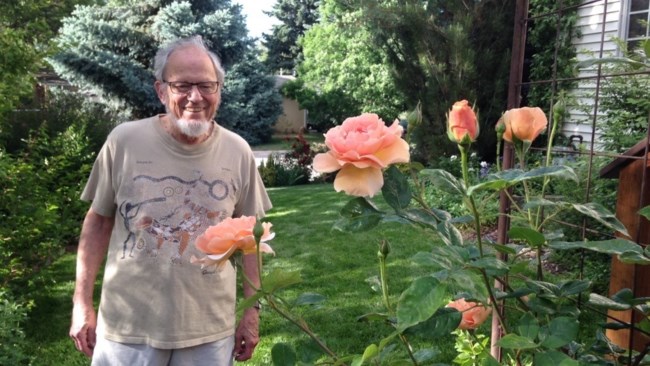 Nick was my client, my friend, my family.

I have a lot to say about him. First, here’s what others have said and said well.

From Scott Rochat at the Times-Call: https://www.timescall.com/2019/06/09/scott-rochat-someone-like-him/

Nicholas Lee would be delightfully embarrassed to find himself mentioned in my column.

A long-time friend and a fellow Longmont Theatre Company actor, Nicholas was also a regular reader of these weekly words. He always had a compliment and often a thoughtful comment or two on what I’d written, while his quiet smile radiated brilliantly over his Uncle Sam beard.

And yes, unfortunately,  the past tense is appropriate. Nicholas passed away on Thursday.

The thing is, like many actors, Nicholas was something of a quiet soul. Having an entire column to himself would likely bring on a blush, a shake of the head, and a self-deprecating chuckle about being hard up for material.

One hates to embarrass a friend. So I’m going to write about someone like him, instead.

Someone like Nicholas would be a gentleman and a gentle man, quietly courteous and welcoming to just about anyone in his path. He’d talk to long-established directors and developmentally disabled audience members with the same respect, warmth, and interest.

Someone like him would cultivate a few eccentricities, such as his decades-old Uncle Sam facial hair and an elocution so carefully measured that it sounded English — the sort of touches that make the world a more colorful and interesting place. But he’d also be able to set them aside at need, such as by shaving every last hair on his head, beard and all, just because a friend wanted him to play a real-life figure known for being spear bald.

And someone would like him, by the way, would be the first to laugh at the resulting reflection in the mirror.

Someone like him would fit comfortably into a hundred different roles in the world you shared — say, a clumsy King Pellinore of Camelot, or a veteran British actor gone to seed, or a sharp-tongued and pushy agent — but would have so many more facets that you only got to glimpse briefly. Like fluency in Russian. Or a church choir he was especially proud of. Or the years and years of teaching that helped shape a delightful personality, firm but understanding, disciplined but sly.

We all know a “someone like him,” I think. The details may differ, but the overall picture is the same. The person who never forced themselves into the spotlight, but became part of the emotional undergirding of the entire group. The one who sometimes made you laugh and sometimes made you think, but who mostly made things work.

And when they’re suddenly not there, you feel it. Something has slipped. A piece of the puzzle has been lost, a line of the drawing is out of place.

You go on. You need to. After all, they’d be horrified to think that they were holding things up. But it isn’t the same.

Though if you’re lucky, they’ve passed on enough of themselves to keep some of that strength present, even in their absence.

Because all too soon, we’ll be missing them when they’re gone.

Just like my friend Nicholas Lee. Whom, you will note,  I carefully did not write about today.

And who, wherever he is,  is probably laughing out loud at this reflection as well

Charles Nicholas Lee, 85 of Longmont, passed away on June 6, 2019. Nicholas was born July 27, 1933, in Washington, D.C. to Charles and Cornelia (McAlister) Lee. He grew up in Tacoma Park, MD, and graduated from Montgomery Blair High School in 1950. Nicholas received the Adenauer Fellowship, and a Fulbright scholarship, and studied abroad in Europe. While in Germany, he met Mollie Boivin on a bus. They fell in love and on January 11, 1956, they were married at St. Nicholas church in Brighton, England. Nicholas obtained a master’s degree from the University of Maryland and then a Ph.D. from Harvard University. In 1965, he and Mollie moved to Boulder, CO where he worked as a Professor of Slavic Languages at the Colorado University in Boulder. Nicholas had a brilliant mind and loved language, culture, and literature. He taught Russian, French, and German and dabbled in Polish and Spanish. He was a long-time member of St. Aidan’s Episcopal Church in Boulder. He was very active within the church, singing in the choir and working in the healing ministry. Nicholas enjoyed opera, theatre, music, and helping Mollie in the garden. He touched many lives and will be truly missed by all who knew him. Nicolas is preceded in death by his parents and one sister, Katherine Riepenhoff. He is survived by his loving wife of 63 years, Mollie Lee and their children; Christopher (Beth) Lee of New Zealand, Bronwyn (Scott) Fraser of Longmont, CO, Alison (Allan) Wells of New Zealand, and Jennifer (Tom) Terbush of Castle Rock, CO, eleven grandchildren, seven great-grandchildren and one brother, Anthony Lee. A memorial service will be held at 10:00 a.m. Friday, June 14 at St. Aidan’s Episcopal Church. In lieu of flowers, memorial contributions may be made to the St. Aidan’s Episcopal Church.

My first encounter with Nicholas Lee was a routine call for help with setting up and using a new iMac. We hit it off well, got the machine working and off he went. Clearly sharper than the average bear. I had a lot of clients then so I made note of him but little more.

What distinguished Nicholas was that he kept at it. Regularly upgrading, using his mac to do every kind of media it could, including getting overseas broadcasts in Russian so he could have another take on our news.

Our conversations grew more and more complicated and deeper. I met Molly and saw the amazing love they had for each other.

One year I built them a FileMaker database to keep track of all of their Christmas cards. Best fun I ever had. I think he was still using it.

He was always a friend, always supportive.

Then, my own life got… complicated. We lost touch for a time. Recently I fell ill with a rare muscle condition and smack-dab in the middle of that mess I found out (like a boot to the head!) that not only had Nick died, but over a year previous!

Having just fought off the Shadows it took my knees right out from under me. I sat in the hospital bed, festooned with wires and IVs, sobbing like a lost child. Proud, hot, painful tears and sobs of anger and grief. Nick was one of the finest men I ever knew. Having him struck down so suddenly was like seeing a begemmed crown smashed by a hammer. Losing such a bright Light all at once was like a hood over my head for hours.

It still hurts to even think about his absence.

But I have my own small piece of him within me. The image of his smiling face, that impish grin and twinkling eye.

Wherever he is, there is peace and joy.

I will join him there when I can.

Till then, farewell my friend.