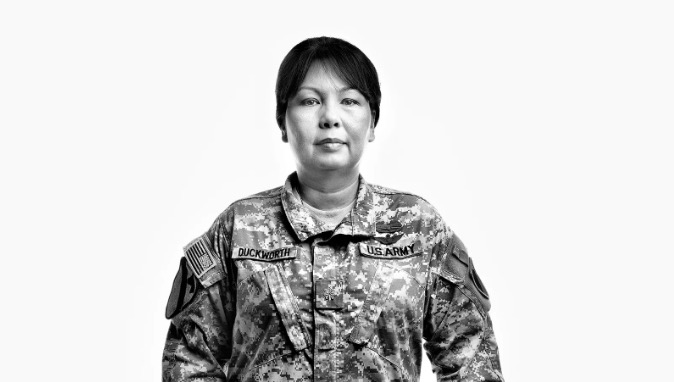 Senator Duckworth, a paraplegic vet, has a few words.

Duckworth’s full remarks as prepared are below:

I come to the floor today appalled by what appears to be a total betrayal of our troops by the man who’s supposed to be their Commander in Chief: a man who swore an oath to support and defend our Constitution from our nation’s enemies.

This weekend, news broke that Russia offered bounties to Taliban-linked militants for the murder of U.S. troops and other coalition forces in Afghanistan… bounties that have reportedly led to the death of at least one American servicemember.

Yet while numerous news outlets have confirmed that Donald Trump was briefed on the matter months ago, his Administration still hasn’t taken any apparent steps to push back against Russia’s blatant and provocative act of aggression.

In fact, far from authorizing any normal, reasonable, expected retaliation, Trump has refused to issue even a cold word about the foreign adversary colluding with terrorists to kill Americans in exchange for cash.

Instead, he’s continued to heap praise on Russia and the tyrant at its helm, describing the, quote, “great friendship” between our countries as recently as last month—long after he reportedly learned of the bounty scheme.

But despite many independent news reports claiming otherwise, the White House spent the weekend denying that Trump was ever told of this intelligence.

Well, saying Trump Administration officials are prone to lying is like saying they’re prone to breathing, but there are two possible scenarios before us, both damning for the man who’s supposed to be in charge.

The first is that Trump was never actually looped in.

In this case ignorance isn’t exculpatory.

“I didn’t know that our adversary was helping kill American troops because no one told me” isn’t an excuse for the Commander in Chief of the greatest military on earth. It’s a confession of incompetence.

If he was truly never told, then that means that his own staff either believes he’s so compromised by Russia, or they consider him so counterproductive to the running of the country, that they thought it necessary to hide critical information about our national security.

And if it is true that those who knew of this threat of American lives failed to tell the President, then we should expect a President with such an affinity for firing senior officials to have no qualms about acting swiftly to remove the cabinet level-officials who failed to share this critical information.

The second—far more likely—option is that they’re covering for him.

That of course Trump knew, yet he still didn’t act.

That this “America First” president went right on placing Russian interests ahead of American lives… kept on acting as Putin’s lackey, trying to score Russia an invite back into what would be the G8 even as he learned that they were working with terrorists to target our troops.

Then, when news finally broke on Friday, he decided to lie about what we he’d known all along… focused more on protecting his own personal reputation than protecting the troops sacrificing for our country overseas on his orders.

Well, at least one American servicemember is reportedly dead as a result of these bounties.

And while he spent his weekend golfing, lying and making sure the buck stops anywhere but with him, our troops in hotspots around the world were forced to wonder whether they might be next… whether a bounty might be placed on their heads tomorrow, and whether the President would even care enough to respond if that were the case.

Once again, Donald Trump has abdicated any semblance of real leadership.

Look, even if we somehow swallow the pill that the Trump Administration is so incompetent that no one ever told Trump that a foreign power conspired to commit acts of terror against our troops, it still wouldn’t explain his response now that he does know.

Not once since the story broke has he expressed his sorrow for those who lost a loved one or expressed awe at the bravery of the servicemembers who are in harm’s way because they love their country so much that they’re willing to go to a warzone for her.

He’s had time to call Joe Biden names, retweet a video promoting White Power, promote conspiracy theories and bolster Russian propaganda efforts by questioning the American intelligence experts who work for him, but not once in the past 72 hours has he found the time to express outrage that Americans are dead.

We, the American people, should be outraged by what he’s choosing to prioritize instead.

I’m racking my brain for any justifiable reason for Trump’s reaction.

Does he think there are good people on both sides of this debate, too? In the debate between killing American troops and protecting them?

Does he think the word of Vladimir Putin is just as good as the dedicated public servants and intelligence officers who put themselves at great risk to make sure he has the best, most accurate information to make national security decisions?

Does he think that not retaliating will help bury the issue, and that burying the issue will help keep his poll numbers from sinking any lower?

Make no mistake: not responding here is a response in its own way, and it’s a response that further endangers our national security.

Just as he did when he pandered to another tyrant and announced he’d sweep our troops out of Syria last fall… just as he did when he wanted to look tough by ordering the assassination of Iranian General Qasem Soleimani last winter… he has put Americans in warzones in even greater danger than they were already in… in greater danger than they need to be in.

By refusing to call out this wrong… by decrying the reports as fake news…  by being so incompetent in matters ranging from foreign policy to common decency, Donald Trump is making it more likely that other hostile powers will work with other terrorist networks to exchange other American lives for stacks of cash.

He’s made it more likely that more spouses will be widowed and more moms and dads turned into Gold Star parents.

Listen, I ran for Congress so that when the drums of war started beating, I’d be in a position to ensure that our elected officials fully consider the true costs of war—not just in dollars and cents, but in human lives.

I never imagined I’d have to stand here to point out that the American President should be angry, even furious, when another nation puts a bounty on the heads of our troops.

To point out that the Commander in Chief of the most powerful fighting force the world has ever known should act like it.

Those troops deserve to know what the Administration is doing to protect them and why Trump has failed to take action.

That’s one reason why I’m demanding a Senate hearing to hear testimony from the Secretary of Defense, the Secretary of State, the Director of the CIA and others: so we can get to the bottom of this once and for all.

Donald Trump has never understood what words like “sacrifice” or “courage” mean.

So how dare he let his own personal cowardice…  his inability or, even worse, his disinterest in standing up to Vladimir Putin… lead to a reality where those Americans actually brave enough to serve are put at greater risk?

How dare he let his own personal insecurities endanger our national security?

In the face of all he’s done and all he continues to refuse to do, how dare he still call himself our Commander-in-Chief?