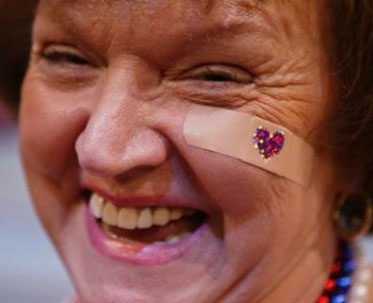 Hat tip to the Palmer Report

Drop by and drop a dollar in the hat, they’ve been at the front lines for years and kicking ass nonstop —mdw

As Adam Serwer observed in his popular “The Cruelty Is the Point” piece for The Atlantic in October 2018, “The Trump era is such a whirlwind of cruelty that it can be hard to keep track.” Serwer further revealed the truly sick part, that Trump and his supporters bond by “rejoicing in the suffering of those they hate and fear.”

I can personally relate to this. I have been the target of a CO GOP-driven hate campaign that, happily, failed.

Essentially, I was blogging daily about our horrible GOP mayor Bryan Baum – whose earliest action was to dissolve Longmont’s Affordable Housing program – and his virago of a wife who was obviously nipples-deep in GOP muckraking.

Mere days after my beloved wife Marilyn died of cancer after a long battle, someone I’m sure connected to Baum posted a hateful remark likening my wife herself to cancer. I was incensed and luckily I held back and realized it was a clumsy attempt to provoke a threat from me. Big FAIL there, kids. Looking RIGHT AT YOU CO GOP.

Then it got weirder. Here’s a dedicated post I wrote about it back then.

Thanks again to the Palmer Report and Adam Serwer of The Atlantic. —mdw