My litany of Comcast’s misdeeds starts with their idiotic harrassment of people trying to cancel their service. This was just one of probably THOUSANDS of users they needlessly abused and then gave the usual corporate non-apology.

If Dante’s Inferno had been written today, an extra circle of hell would be dedicated to dealings with cable providers.

Not taking no for an answer, the rep peppered Block with questions: “You don’t want something that works?”; “So you’re not interested in the fastest internet in the country?”; “I’m really ashamed to see you go to something that can’t give you what we can!”; “What is it about this other internet provider???”

But Comcast wasn’t a spurned lover deserving of an explanation. It is a cable provider.

Block maintained an impressive state of calm, cooly repeating “I’m declining to state, can you please go to the next question” so many times that if this were a drinking game, players might not survive the length of the call.

Block writes: “This recording picks up roughly 10 minutes into the call, whereby she and I have already played along and given a myriad of reasons and explanations as to why we are canceling (which is why I simply stopped answering the rep’s repeated question — it was clear the only sufficient answer was “Okay, please don’t disconnect our service after all.”).”

Block said that his Comcast was successfully disconnected at the end of the call.

We are very embarrassed by the way our employee spoke with Mr. Block and are contacting him to personally apologize. The way in which our representative communicated with him is unacceptable and not consistent with how we train our customer service representatives. We are investigating this situation and will take quick action. While the overwhelming majority of our employees work very hard to do the right thing every day, we are using this very unfortunate experience to reinforce how important it is to always treat our customers with the utmost respect.

From Community Networks (copied in case the article is removed later) – here’s a detailed article about Comcast’s political machinations that included over half a million dollars to deny Longmont voters access to their own fiber optic network:

Today is election day in Longmont, Colorado — tomorrow we will find out if Comcast’s record-breaking campaign of lies has scared enough voters to prevent the community from using its infrastructure to encourage broadband competition.

It looks like Comcast will break the $300,000 mark, funneling the money through the Colorado Cable Telecommunications Association. Two years ago, it spent over $245,000 in a similar effort — setting the record for most amount spent on a local election in Longmont. Comcast and its anti-competition allies will spend approximately 10x as much as the total amount spent on the entire mayoral campaign. All to stop the city from having an alternative to the cable/DSL duopoly.

In a recent news story about the absurd spending level, the present Mayor struck an indifferent tone:

“It doesn’t really matter at this stage of the game,” Baum said. “It’s going to the electorate. The electorate will vote. And we will know on Tuesday how they voted – if they believe a $300,000 ad campaign, or if they believe the people they’ve entrusted their votes to.”

Both incumbents and challengers in the City Council race have unanimously endorsed 2A over the course of the campaign.

The Boulder Weekly has even weighed in on Comcast’s campaign of lies and misinformation, tying it to their efforts two years ago:

In 2009, a similar campaign called “No Blank Check” was bankrolled to the tune of nearly $250,000, primarily by the telecommunications industry. That campaign, which was successful in defeating the measure, was labeled as misleading by city officials because it claimed money would be taken from police and firefighters to fund city telecommunications services.

“It was actually just the opposite of what No Blank Check was saying,” Tom Roiniotis, director of Longmont Power and Communications, told Boulder Weekly this summer. “They were saying we were going to have to lay off police and firefighters. Nothing could be further from the truth. … In fact, telecommunications would actually generate money for those departments. But they had models dressed up as firefighters, looking very sad.”

When we say that this campaign is orchestrated by Comcast, we should be clear — virtually no one in Longmont opposes the 2A ballot initiative. And no one running for office opposes it! See the Boulder Weekly discussion about their support for 2A:

But we — along with every Longmont City Council member and candidate who responded to a Boulder Weekly questionnaire — agree that the city should be able to use its own network, despite the corporate powers’ concerns about losing market share to a new competitor. Taxpayers have already invested in this network and should benefit from it. We strongly urge a YES vote on Longmont Ballot Question 2A.
The Times-Call also supports the measure. Just how unanimous is the support? Consider this report from Longmont’s Future:

One question, on Ballot Question 2A, drew immediate solidarity from the panel.
“Everyone, on three, say yes or no on 2A,” Baum told the other candidates with a grin. “One, two, three …”

“That is the one thing we all agree on,” Baum said.”

You can listen to a local radio story about the referendum here or at the bottom of this page, where it is embedded for the future.

Comcast’s campaign of lies has gone so far as to take out a full-page ad inventing a story of impropriety, accusing the City of somehow colluded with Alcatel-Lucent to scam the public. 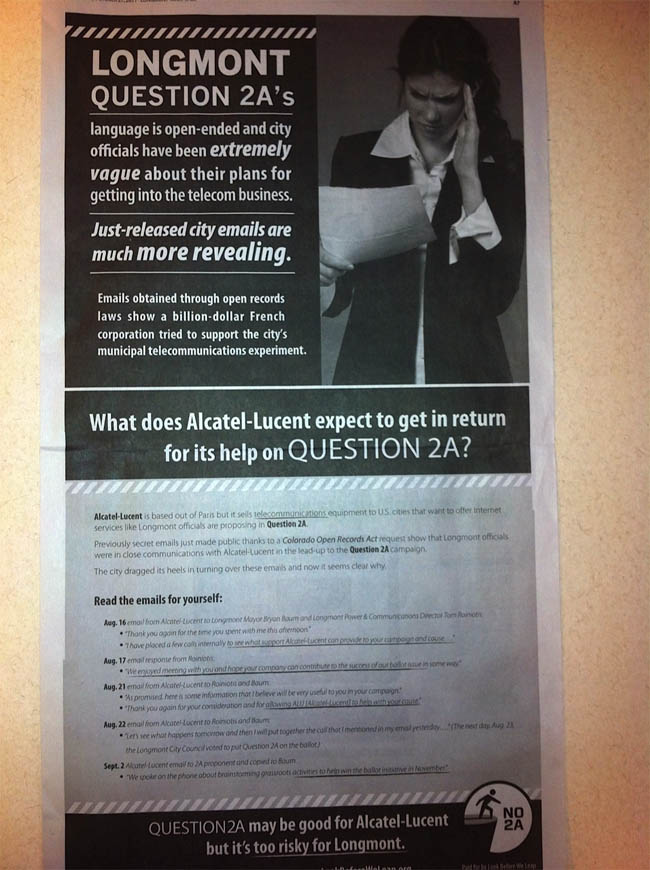 The Times-Call looked into the allegations and found nothing but smoke and mirrors — exactly the tactics of bait-and-switch you would expect from an out-of-town astroturf campaign:

A group against Longmont Ballot Question 2A claims city officials coordinated a push for the issue with telecom company Alcatel-Lucent, a claim the city denied, saying that early email contacts with the company were taken far out of context.

The opposition group Look Before We Leap said the charge would be part of their advertising against 2A as the election campaign enters its final week. The group spent about $2,800 to look through city emails related to the ballot question, which, if passed, would lift state restrictions on how Longmont can use a fiber-optic loop it built in 1997.

The group’s findings included three messages from an Alcatel-Lucent representative offering information and suggestions for a supportive campaign to Mayor Bryan Baum and Longmont Power & Communications director Tom Roiniotis. All three were sent before Aug. 23, the date the City Council put the question on the ballot, after which city staff could not be involved for or against the issue, though elected officials could.

Roiniotis called the charges ridiculous and said there was no relationship. He said he had received many “sales calls” from telecommunications companies interested in Longmont’s fiber system; the main difference here, he said, was the offer of help.

“I made it perfectly clear to them that they could do anything they wanted to do, but that the city could not be involved in advocating for it,” he said. He also noted that the city had been aware of much of the information sent by Alcatel-Lucent since 2009, the last time Longmont tried a ballot issue to lift the restrictions.

In the email messages, Jennie Burgoz of Alcatel-Lucent offered contacts and information related to successful municipal telecommunications campaigns in Chattanooga and Bristol, Tenn. She also suggested ideas such as “tricking out” Baum’s campaign vehicle as a mobile fiber vehicle and working with attorney and advocate Jim Baller, who was familiar with a similar campaign in Illinois.

Comcast’s “Look Before We Leap” group has even attacked the actual grassroots pro-2A groups for how little they have spent!: [from the same article as above]

Merritt said he also had concerns that there had been no reporting by Longmont’s Future, a pro-2A website. That amused its proprietor, Jonathan Rice, who is the only person operating the site. 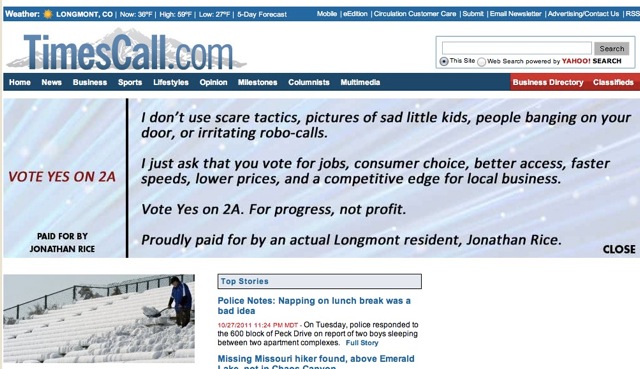 Some of the pro-2A folks have responded to these trumped-up charges with the following press release:

Look Before We Leap – a front group for the Colorado Cable Telecommunications Association – continues to block Longmont’s efforts to partner with private industry.

In a new twist on the saga of Ballot Question 2A, which would re-establish Longmont’s right to partner with private industry to use its fiber-optic ring, Comcast-sponsored group ‘Look Before We Leap’ has now spent over $297,000 (http://www.ci.longmont.co.us/city_clerk/election/candidates/documents/LB…) on robo-calls, door-knockers, and most recently a full-page ad in the local Daily Times-Call to mock the city’s efforts to partner with private employers.

The city of Longmont, which attempted to win the valuable gigabit network from Google last year, is prevented by state law from using its fiber-optic network without a voter referendum. That is what is on the ballot this November 1st – with Comcast’s monopoly over telecommunications at risk.

In recent public comments by Google VP of Access Services Milo Medin, he specifically identified political hurdles such as these as a cause for automatically removing cities from consideration. As Google reviews additional cities to partner with, Longmont will continue to be disqualified if Question 2A does not pass.

Question 2A specifically supports the City working “either directly or indirectly with public or private sector partners.”

“Look Before We Leap have tried to pretend that this is a grassroots effort,” said Jonathan Rice, editor of the pro-2A website longmontsfuture.com

“But the truth is that not one single donation over $50 has been declared by the front group… other than those of the Colorado Cable Telecommunications Association.”

The organization has spent more than ten times what the rest of Longmont’s elections put together will spend, and flies in the face of elected public officials’ opinion.

“Every single candidate for office and every incumbent, in every race, supports this measure,” continued Rice. “But Comcast and its friends are more interested in profit than progress, and continue to run a smear campaign to spread misinformation and outright lies – they recently posted Mayor Baum’s name as an opponent of 2A when he is actually a vociferous supporter.”

With Longmont reeling from the loss of hundreds of local jobs over the last few months, it could badly use a shot in the arm from a major employer – but without 2A passing, that won’t be Google.

“We tried our darnedest to get them to come here,” said Rice. “But without access to the fiber optic ring, they just couldn’t quite bring themselves to be part of Longmont’s future.”

Question 2A is a battle between the rights of citizens and local businesses versus the desire of out-of-town corporate interests to maximize profits at their expense.

Literally the day that NextLight announced that their installation schedule was being accelerated, Comcast began implementing data caps on their customers – our monthly bill nearly doubled! I heard the same complaint from neighbors. The city was told, nothing was done. I let it slide because I KNEW Comcast’s days were numbered.

Less than a week after we made the switch to NextLight, two very nice young gentlemen wearing XFinity-logo shirts and tasteful khaki pants showed up in our neighborhood and tried to push Comcast’s service.

Among the bald-faced lies they told me were:

This is sad and shameful and I reminded the nice young men of Comcast’s political adventurism and how angry it had made me at the time. The older of the two immediately tried to mollify me by saying: “Don’t get heated” – and at that point I politely asked them to move along.

To the shiny-suited shits at the top of the Comcast foodchain:

Goodbye assholes, your days are numbered. You are officially Persona Non Grata in our home.