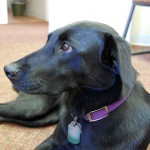 My coworker Marc’s dog that he brings to the office frequently.

I love Taba and the feeling’s mutual*.

When she was adopted her given name was ‘Tabatha‘ which is too long for a dog’s name (three syllables makes it a bit hard for them to learn – or so Marc says) so Marc chose to shorten her name to ‘Taba,’ which also had roots in the name of a beach town he went to during the three years he lived in Santiago, Chile, called ‘El Tabo‘ – but since Taba was a girl, it became ‘La Taba.’

She’s a delightfully sweet Labrador Retriever/Border Collie mix, full of energy and joy. When Marc arrives at the office in the morning she literally careens up the stairs and into my office barking and bouncing around – obviously overjoyed to see me.

How can you not love that?

A mutual friend to all above, E. Johnston of Lizzardbrand, Inc. did this great pet portrait:

* It’s also just vaguely possible that the box of biscuits in my desk drawer has a little something to do with it but I indulge myself in the conceit that it’s me she loves.