I haven’t heard from her in years and if this is how she may meet her end I hope she’s found help. It sounds horriffic all around.

This text is a direct transcription from this PDF: 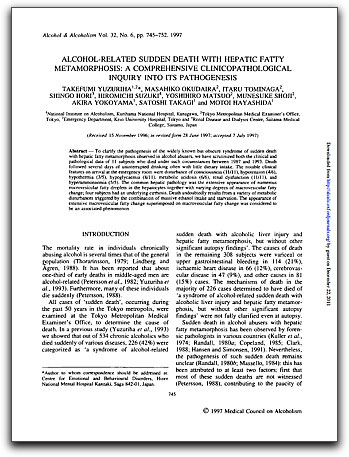 Abstract – To clarify the pathogenesis of the widely-known but obscure symptom of sudden death with hepatic fatty metamorphosis observed in alcohol abusers, we have scrutinized both the clinical and pathological data of 11 subjects who died under such circumstances between 1987 and 1993. Death followed several days of uninterrupted drinking often with little dietary intake. The notable clinical features on arrival at the emergency room were disturbance of consciousness (11/11), hypotension (4/6), hypothermia (3/5), hypoglycemia (8/11), metabolic acidosis (6/6), renal dysfunction (11/11), and hyperammonaemia (5/5). The common hepatic pathology was the extensive appearance of numerous microvesicular fatty droplets in the hepatocytes together with varying degrees of macrovesicular fatty change; four subjects had an underlying cirrhosis. Death undoubtedly results from a variety of metabolic disturbances triggered by the combination of massive ethanol intake and starvation. The appearance of extensive microvesicular fatty change superimposed on macrovesicular fatty change was considered to be an associated phenomenon.

One thought on “Hepatic Fatty Metamorphosis”