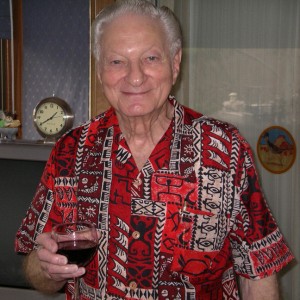 Colonel Alan E. Goldsmith, U.S. Air Force, Ret., 85, died December 22nd, 2008 in Walnut Creek, California. Enlisted as an Aviation cadet in 1942, proudly served in combat in the U.S. Air Force (and predecessors) during three wars (WWII, Korea and Vietnam), also battled (honorably and ethically – no honorariums, gratuities, fund raisers or PACs) the Congress during two Pentagon tours, and retired in 1973 after over thirty years active duty in England, France, Germany, Japan, Korea, Cambodia, Laos, Philippines, Thailand, Vietnam and other parts of the world (with occasional tours in the U.S.). Flew over 5600 hours in open-cockpit trainers, Bombers (B-17 and B-25), Transports (C-46, C-47, C-54, C-118), Fighters (P-61, F-82 and some jets), and other aircraft types, at speeds from Mach 0.2 to Mach 1.2.

After his Air Force career, he worked in management and management consulting, dabbling in computers and professional video photography, after discovering it was impossible to make a decent living sandbagging on various golf courses.

Eternally proud and grateful for the love, devotion, confidence and unwavering support of his wife and best friend, Katsue, who survives him. Also survived by a number of sons and daughters, their various spouses, and many grandchildren, nieces and nephews, a few good friends, some great physicians, attorneys, accountants – and the IRS. He lived a wonderful adventure and left with no regrets and one thought: “we’re all terminal so do some good for others along the way.”