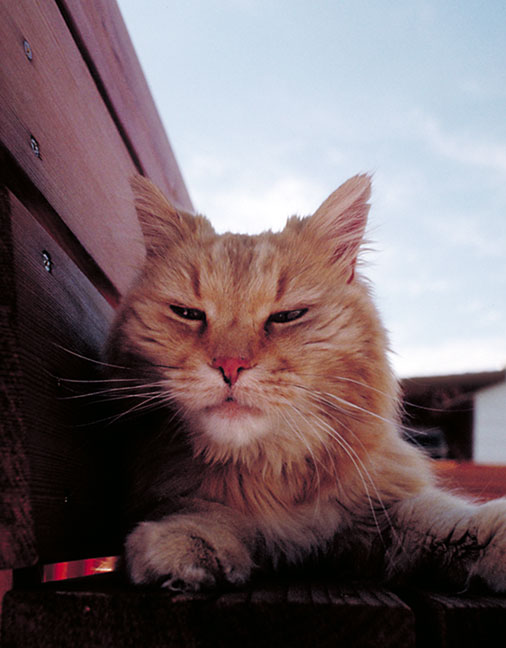 This old demon was simply the most amazing cat I’ve ever known. He’s long gone now, but this photo (click to enlarge) hangs in my home and he is fondly remembered.

His first owner, Alfred Beffie, a Dutch emigree who, with his wife Mary, fled the Germans during WWII, referred to him as ‘Alte Leur’ or ‘Old Lion’. When Alfred’s wife Mary died and Alfred moved in with his son, he asked my then-wife Priscilla to take Nelis. She did, without my foreknowledge. At first I was furious – we already had two cats! In an apartment! All worked out though and we shortly moved into a house in Longmont, where Nelis quickly became the King of the Neighborhood.

When Priscilla and I divorced a few years later, Nelis went with her and subsequently died in Albuquerque, NM. He literally keeled over one morning, finally succumbing to a massive heart attack that drugs had kept at bay for nearly a decade, defying numerous veterinary prognoses.

When I heard of his demise, I wrote this:

Small friend
since our paths have parted
I will not see you fall
where will your road end?

In my mind’s eye
I see you, Leonine
in final repose
stretched as if running

As the earth holds you
in it’s jealous bosom
may you dream the Warrior Dream
always victorious.