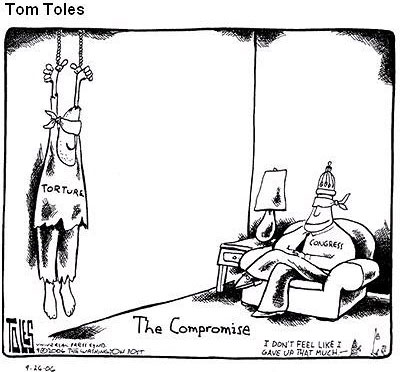 Yet today, the 12 Democrats who checked their consciences at the Senate cloakroom and voted in favor of the Bush Administration’s torture bill, have almost nothing to say about their votes. In case you haven’t seen the roster of who voted with Republicans on this, here they are:

Of these, only four have issued press releases commenting on their vote and, amazingly, those who are talking spend most of the time sounding apologetic for a vote they obviously know they should not have cast.

â€œThe bill I voted for today was the best bill we could reasonably expect in this highly charged political environment,” said Salazar. “Due to the many controversial and far-reaching implications of this bill, I believe it would be appropriate to force Congressional review of this bill in five years. I have concerns with this bill, but on balance it meets my personal view of what America needs to get the job done.â€

I’ll never raise a finger for you ever again or give a penny to help your campaign.

Pardon the bad language folks, but this just frosts my cookies.